A guide to some of Twitters’s new monetization features, including Tip Jar, Super Follows, and Ticketed Spaces.

So, you’ve built up a following on Twitter and are now looking to cash in, huh?

Unfortunately, you’ve picked the wrong social network. Unlike YouTube, Facebook, and even TikTok, Twitter does not have a program where it pays creators for content. There’s no monetizing videos and getting a cut of the ad revenue on Twitter (unless you’re a big publisher, that is.)

However, lucky for you, Twitter is working to change that. While there still isn’t a revenue share model on the platform — besides a specific video monetization program reserved for big, partnered publishers called Amplify Publisher Program — there are a few new features that will allow content creators to make money on the platform. These features currently all involve creators getting paid directly by other Twitter users instead of the company and its advertisers, but it’s a monetization model nonetheless.

Interested? Let me walk you through how you can utilize them. But, heads up! This article will not look at the various ways you can make money on Twitter through third-party websites such as via sponsored tweets or affiliate links. We’re going to focus on official revenue paths implemented by Twitter. And keep in mind that many of these features are still rolling out, and may not be available to all users.

Tip Jar is basically a way for your followers to monetarily “tip” you via some of the most popular payment platforms online. It essentially works like popular bio link tools like Linktree, except it’s built right into Twitter.

Simply tap “Edit profile” on your Twitter profile page. If the feature is available to you, you’ll be able to turn on Tip Jar right in that menu. From there, you would set up the payment options for those who’d like to throw you a tip. Tip Jar currently works with Cash App, PayPal, Venmo, Patreon, and Bandcamp.

After Tip Jar is all set up, anyone who lands on your profile can just click the little Tip Jar icon, choose the payment option of their choice, and be taken directly to your personal link where they can send you money on that platform.

Yes? Well, then Super Follows may be available to you!

Super Follows is Twitter’s version of a membership or subscription monetization model. Creators who have Super Follows activated can charge users a monthly fee for bonus content. 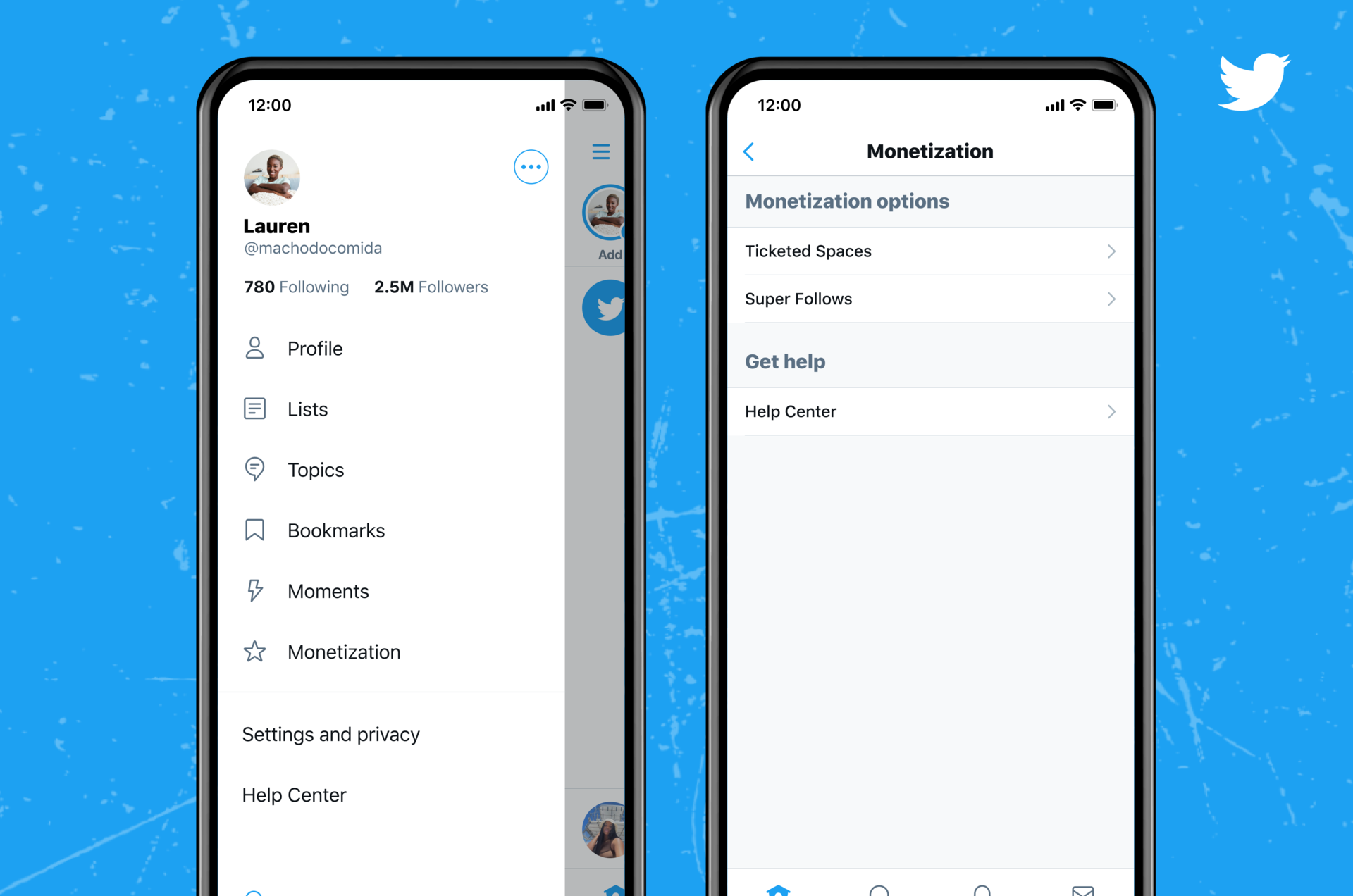 Here’s where you can apply to implement these new monetization features. Credit: Twitter

If Super Follows is available to you, just hit the hamburger menu icon in your Twitter app to open up the main sidebar menu. Tap “Monetization” then tap “Super Follows,” and fill out the application. If your application gets approved, you’ll need to accept Twitter’s “Super Follows Creator Terms.” Some qualifying applicants might be waitlisted if they aren’t in the test group. 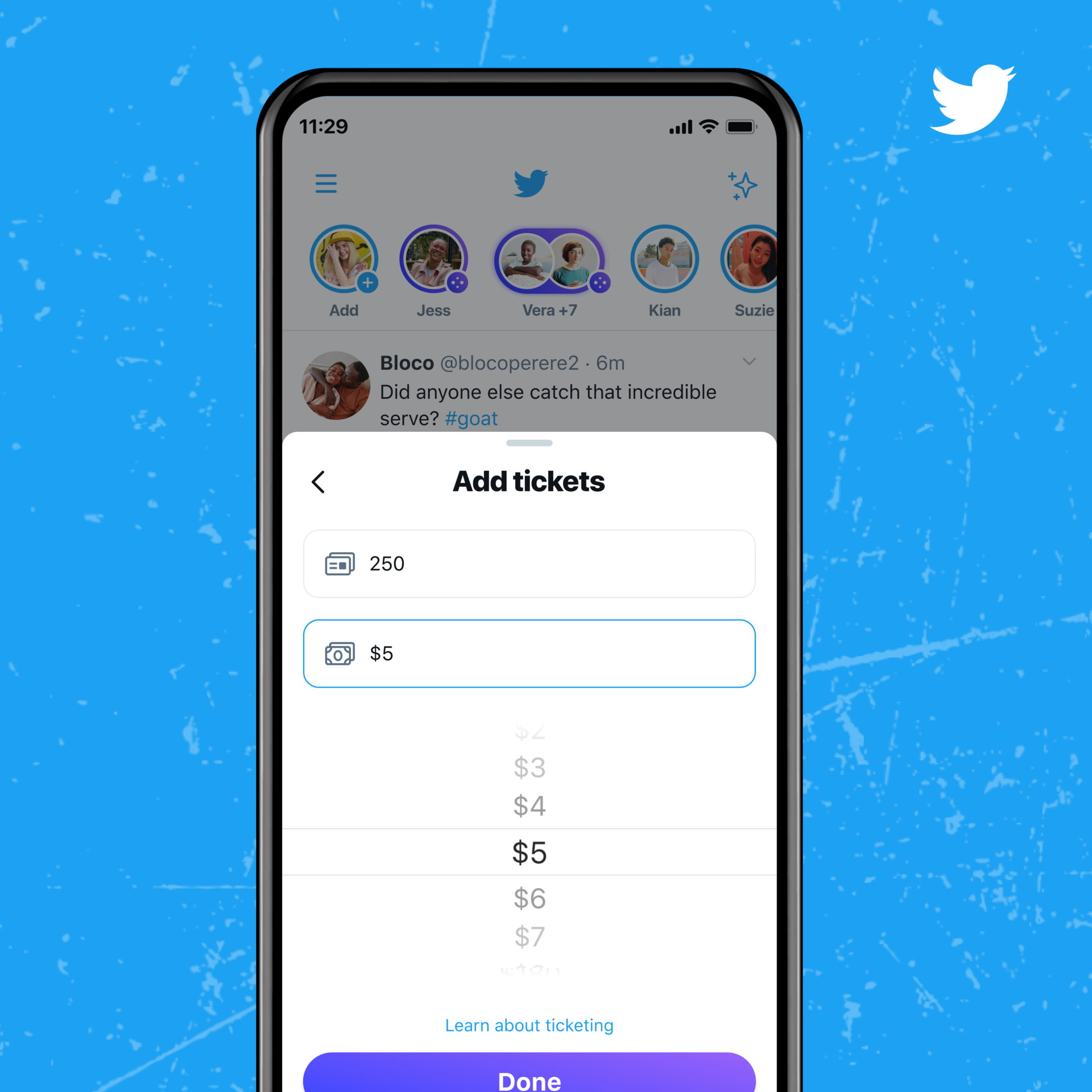 If events are more of your thing, then you should look into Ticketed Spaces.

Twitter Spaces is the platform’s built-in version of the popular mobile app Clubhouse. It’s basically a live audio chat and it’s proven to be fairly successful on Twitter for the few months it’s been live on the platform.

In fact, the Spaces feature (which is free) has been so successful that Twitter has rolled out a monetization feature for it, and that’s why this feature is called “Ticketed Spaces.” If you have at least 1,000 followers, and run three Spaces a month, you can charge users to attend one of these live audio chat sessions.

To apply to run Ticketed Spaces and charge for your Twitter Spaces events, simply click the “Monetization” button on the main menu, tap “Ticketed Spaces,” and fill out the application. If approved, you’ll need to open and link a Stripe account to use Ticketed Spaces.

Once that’s all squared away, you can charge anywhere from $1 to $999 per ticket for your Spaces event. Unlike a regular Spaces chat, a host can limit the audience size in a Ticketed Space. Like Super Follows, creators can make up to 97 percent of the revenue on their Spaces depending on their lifetime earnings.

And there you have it: all of the official avenues built directly into Twitter allowing users to make some money… at least for now.

It’s clear Twitter is experimenting with a number of different revenue models for users. Monetizing the way YouTube and Facebook do — via ad revenue sharing — remains a tantalizing unexplored possibility for monetization on Twitter. While they do have a version of this for large publishing partners (the aforementioned Amplify Publisher Program), rolling this out for their larger user base would truly be a game-changer for creators on their platform.

24 Fabulous Places To Visit In Ireland: The Ultimate Irish Bucket List For 2021

How to get a job in USA from Nigeria: useful tips for everyone