No one should be made to feel unsafe, harassed, targeted, abused, or harmed online or off. When it’s happening on social media apps, it’s up to the platform itself to effectively tackle this.

But are they really getting there fast enough?

Like most social platforms, hate speech and abusive comments plague some Instagram users — we saw this en masse when England footballers experienced a wave of racist abuse in the comments of their existing posts following the UEFA Euro 2020 final.

Facebook, which owns Instagram, claims “we don’t allow hate speech” and “we do not tolerate” bullying and harassment on its platforms, but if you’ve nonetheless been the recipient of abuse on these very apps, these might seem like hollow words.

In February 2021, Instagram gave an update on what it’s been doing to tackle hate speech and abuse on the platform. Between January and March 2021, the company says it removed 6.3 million pieces of hate speech content, 93 percent of which Instagram identified before it was reported. Within the app, Instagram says it removes “photos or videos of hate speech or symbols,” “posts with captions that encourage violence or attack anyone based on who they are,” and “specific threats of physical harm, theft or vandalism.”

But sadly, people find ways around these rules. If you see a comment or post on Instagram that’s abusive, bullying, hate speech, misinformation, or appears to be inciting violence or physical harm, you can report it. Whether or not Instagram does anything with your report, or as happened to one of Mashable’s reporters who reported racist comments on Instagram, simply suggests that the comments “didn’t go against their community guidelines,” well, that’s another problem.

For the record, Facebook defines hate speech as “a direct attack against people — rather than concepts or institutions— on the basis of what we call protected characteristics: race, ethnicity, national origin, disability, religious affiliation, caste, sexual orientation, sex, gender identity and serious disease.” Attacks, the platform says, include “violent or dehumanising speech, harmful stereotypes, statements of inferiority, expressions of contempt, disgust or dismissal, cursing and calls for exclusion or segregation. We also prohibit the use of harmful stereotypes, which we define as dehumanising comparisons that have historically been used to attack, intimidate, or exclude specific groups, and that are often linked with offline violence.”

1. Swipe left over the comment in question if you’re using an iPhone. Android users, simply tap the comment. You can lift your finger if you’ve swiped, as the icons that appear won’t vanish. 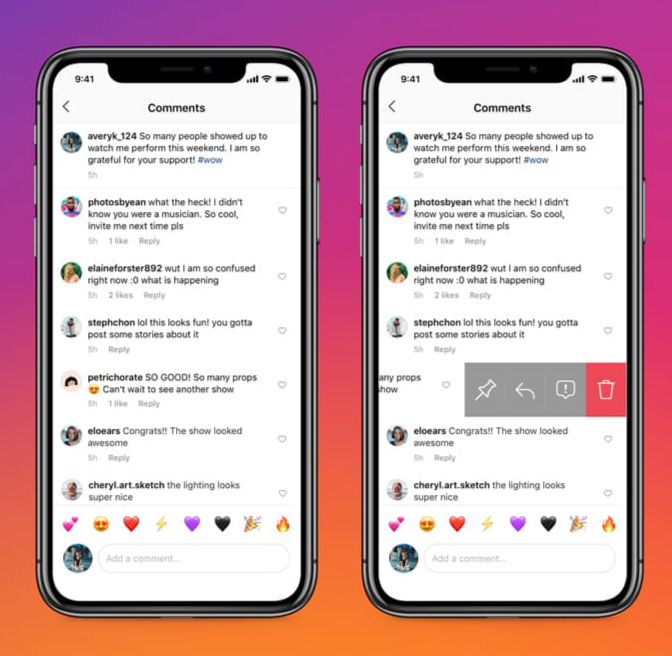 Slide left on comments you want to report, then hit the ❗️ Credit: Instagram / Mashable Crop

4. Select why you’re reporting the comment — depending on which reason you pick, the report may be sent immediately, or you might be asked extra questions about the comment. 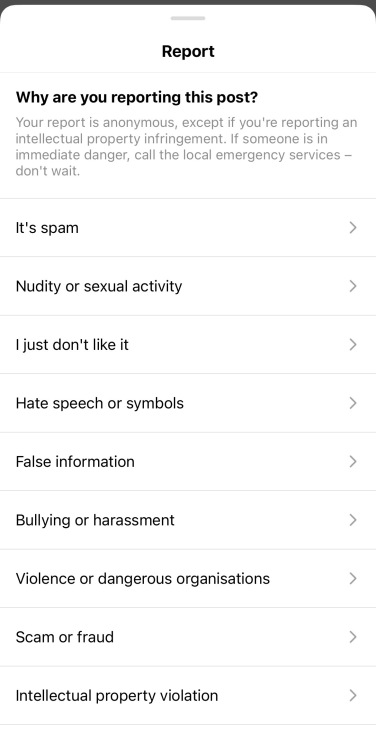 While we’re focusing on reporting abuse and hate speech here, you can report comments and posts on Instagram for many reasons, from bullying and harassment to false information, selling illegal stuff to intellectual property and copyright violation.

All reports are anonymous, the company says, except if you’re reporting an intellectual property infringement. Either way, Instagram says the account won’t be able to see who has reported them.

How to delete comments (on your posts only)

If the comment is on one of your posts, you can both report and delete it. Use the process above to report first (so it doesn’t just disappear without being flagged), and then here’s how to get rid of it:

If you have multiple comments to delete at once (we’re sorry you’re dealing with this), Instagram launched a feature in May 2020 to bulk delete or block, not to bulk report though.

If the comments are on your own posts, you can bulk delete — not bulk report, though. Credit: Instagram

Here’s how to bulk manage comments:

Now, Instagram, let’s see you up that removal process.

24 Fabulous Places To Visit In Ireland: The Ultimate Irish Bucket List For 2021

How to Increase Mental Focus and Stay Sharp